The world for Max and Chloe would change forever as the two friends face moralistic and destiny changing events in Life is Strange, the first title in this award-winning series. Released on physical media, Gather the kindle, prepare the stones and take your place, around the bonfire as we review the art of Life Is Strange.

Beginning with the first title in the series, as with Before The Storm, Life is Strange is an episodic game release that was subsequently sold as a packaged series on the various gaming platforms before seeing a limited edition physical media release on the current generation of home consoles. Having come to this title after its initial release and therefore having the luxury of playing the game in its entirety without any great delay or gap between chapters I was delighted to discover the world of Arcadia Bay and its many colourful denizens and characters that populated this small East Coast American town. As with its prequel and predecessor, the game opts for a pastel style world over an attempt to opt for photo quality realistic graphics, choosing bold and bright contrasting colours that create a stylised presentation for its time was both individual and memorable, these bright tones and shades creating a sense of rustic small town America instantly recognisable and familiar. 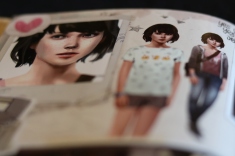 The character design found within Life is Strange instantly evokes memories and images of high school life at that chapter of our lives, the familiar cliques and personalities carrying through the generations and on display as we explore the Academy setting with Max as our guide to teenage life in America. An aspect I enjoyed particularly about both these games was the attention to detail in creating individual and distinct personalities for characters that would often be forgotten or hidden in the background, each trope or personality type from the bully to the coward to the person hiding in the background is designed and brought to life with their own creative style and design. Max and Chloe are of course given dominance in their style and concept art found in the accompanying art book but it was interesting to see some of the design sketches for the supporting students and adults that exist in this digital world. Whilst perhaps because we do see more of Max and Chloe there is greater creative freedom in designing their clothes styles outside the school environment certainly the other character models have their own touches and choices. In contrast to other detailed Art Books we’ve looked at previously which have the afforded luxury of a greater size and scope to look at the conception and creation of characters from design to final execution those found here are somewhat restricted but this was always a supplementary product and should be judged on its merits. I adore the little details and touches when reviewing these art books such as the creative choices and decisions, why Max appears this way, has that haircut for example over another choice. Entirely superficial detail but one that has been considered and provides another level of detail beyond the gaming experience. 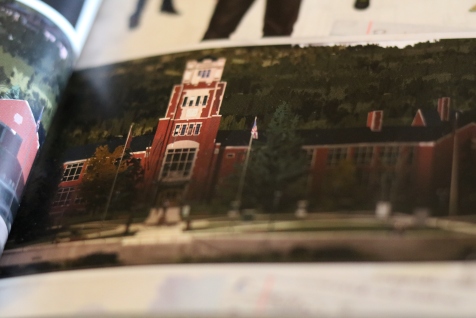 The world of Arcadia Bay is of equal merit and importance, especially from a studio of this size where the ability to create faithful reproductions of the American world is outside their means for the time being. Instead specific choices are made to capture the spirit and atmosphere of small town America, opting for instance on looking at degradation and wealth on a towns nature and structure and designing and creating buildings and worlds such as the dinner in its somewhat dilapidated state in contrast to the bold crisp clean Academy the player finds themselves in for the majority of the game. With that in mind and a restriction on the level of character models available the level design and creation has to hold merit and certainly opting for the pastel world effect helps Arcadia Bay come to life. In contrast to titles that opt to realise the rural outdoors environment such as Firewatch constructing an urban town location that is both believable and acceptable to a user is a difficult prospect, even more so to a studio on a modest budget. Why I appreciate those found in Life is Strange is for the simple reason the buildings and structures they have opted for show a remarkable level of detail using a simplistic design style built up with layers from base colours to the added nuances such as the posters that adorn the lockers of the students in the academy. Away from the academy and home of Chloe and Max the rural locations are stunning to see, not so much for the detail but more the atmosphere created in the lighting effects that present this almost eternal twilight effect of warm sunshine overshadowed by the foreboding storm that is ever-present. The final destruction, should you so wish of the town is remarkable to watch, as is the after effect if you opt to save Chloe and leave the town in its destroyed state. 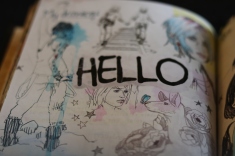 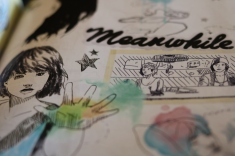 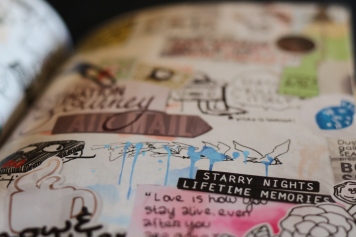 One aspect I enjoyed immensely about this title on its release and in its subsequent prequel title was the approach to artistic creativity and design that permeates both the game and bonus material, the small sketches and photography that are as much a part of Max and Chloe’s personalities and characters as their ability to manipulate time and events around them. With Chloe as seen in Before The Storm it was a tendency to veer towards the creative in the form of sketching and vandalism. With Max in contrast it is the use of sketches and photography that serves the narrative through the course of the game. In the art book include there are pages dedicated to the idle sketches of these characters, a fun addition that added depth to these individuals. These little embellishments are in no way needed or required and on its own merits the game would have been as successful. Why I find them fascinating to explore and share and talk about is the design process involved in conceptualizing a character such as Max then building her up to the final person we witness and control for a short time, from the clothes she wears to the creative mind that inks these drawings and takes these photos. When I have that depth of knowledge as to who this character is it allows a greater level of immersion as opposed to presenting a central protagonist with no history or personality or character and expecting me to feel devoted or involved in their quest. There was a deeper level of connectivity to Max and Chloe in Before the Storm for precisely this reason as we were rewarded with the privilege of exploring the minds of these two characters.

As with Before the Storm the Art Book included in the retail release was a nice added touch and addition to this collection, which includes a soundtrack of a selection of the licenses tracks that accompany the game. Where Storm featured many of the sketches of Chloe in the book I was hoping perhaps for more of Max’s photos and images as her creative outlet in the game is photography and some of them would have been interesting to see in greater detail as the resolution in the final release isn’t that great on occasion to see these clearly and up close. But this is very much a bonus feature and does well to shed some light on the creative input into this game. I would imagine when the second chapter is released in its entirety perhaps the studio will opt to release a supporting art book that covers the trilogy of games to date with a detailed look at the art work and design in a more in-depth detail. Certainly I would pick this up on release as I find the creative process extremely interesting. For now, its time to close the chapter on Max and Chloe and look back with nostalgia at the impact these two characters had on my gaming psyche thanks entirely to the creative process that brought these individuals to life from a conceptual sketch to their final realised form. 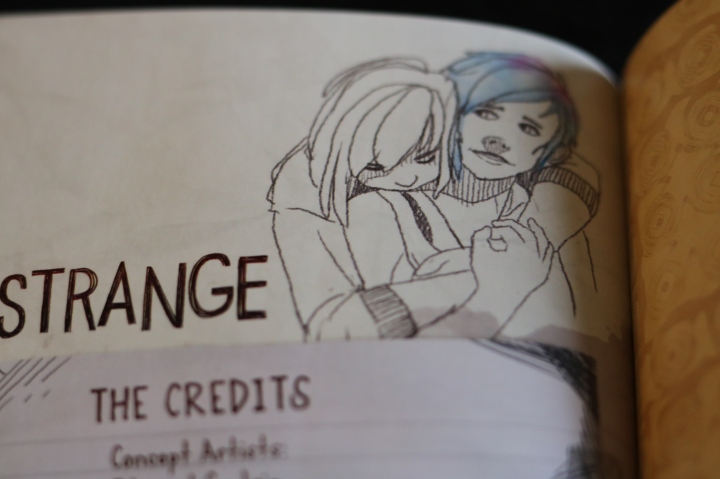 If you’ve enjoyed reading this blog please ‘like’ the Around The Bonfire Facebook page and contribute your own stories and comments, and share my blog and Facebook posts (this is really important – it’s how we reach more readers!). Alternatively join us in the Twitter Universe  for a take on the latest gaming news or Instagram for a wealth of gaming pictures and stories.

One thought on “The Art of Life Is Strange”