“Always there have been six ravens at the Tower. If the ravens fly away, the kingdom will fall”

Last July I undertook the first chapter in my comparative series studying and contrasting the physical and digital world of the City of London as seen in Assassin’s Creed Syndicate from Ubisoft and how the open world game compared to its modern contemporary, real self. This particular series concluded with a tour around The Tower of London and Tower Bridge an accompanying article due in part to the narrative time jump as seen in the game itself shifting from the Victorian era setting of the campaign to a brief interlude in London as seen during the Great War. Whilst there was additional locations and sights to see within the game’s open world environment this seemed like a natural conclusion having visited and explored a number of the main sights in and around the City. In November last year I was fortunate to attend the limited time exhibit Beyond The Deepening Shadow a night-time event that commemorated the sacrifice of the soldiers and troops of the First World War through a series of lit torches symbolising those who attended and signed up to the armed forces at the onset of war. Having recently visited this attraction once more I was reminded of the photography series of images captured as part of the Towers 1914-2014 centenary exhibit that showcased some rarely captured and exhibited photos on behalf of the Imperial War Museum and the Artists Rifles Association of the tower as it existed at that time in 1914 and using digital manipulation inserting modern figures into the same shots to present a powerful comparative series of photos.

This inspired me to go back and visit this subject I have talked about in-depth one last time to compare and contrast the digital and electronic versions of the same event and period, a comparison I hadn’t look to explore previously when attempting to frame identical shots and images from the historical to the contemporary worlds due to the lack of real world historical photos. It was a real treat to come across these photos when visiting the tower to see for one last time just how authentically and accurate the development teams captured the Tower of London as it existed at this time. As a retrospective piece the angles of the photos don’t match up entirely across the three periods I have chosen to analyse, specifically the Tower during the Great War, its digital representation and the modern world as it looks today. As before the intention here isn’t to show up or critique the studio, from the offset of development the studio team were clear this wasn’t an exact likeness of London or a 1:1 replica of the city.  Certainly as discussed previously with certain buildings and attractions the level of reproduction was remarkable in its consistency with the source material. The level of detail in the buildings of Sir Christopher Wren were remarkable to see, especially St Paul’s Cathedral and Westminster Abbey which captured the aesthetic to a remarkable detail. When I previously talked about The Tower of London there was a great level of consistency in the digital and modern world equivalency but certainly some fundamental alterations that existed between the two. Now, for the final time we can view how the world existed both in the real world and the digital world at the same period of time.

Viewed and captured from an elevated position near Traitors Gate, the image of the troops marching off to war hauntingly captures the optimism and fortitude of the young soldiers at the onset of conflicts in 1914 as city professionals and civilians alike reported for duty at the Tower, whose sacrifice is honored annually during the Remembrance and Armistice day events.  Immediately, there are both similarities in the three periods but also a few contrasting differences highlighted in the real world environments and the digital world that now stand out more when looking at the real world counterparts. Most noticeably I’ll observe on is the structural damage to the walls both historically and today, the white brick work and stone contrasting to the undamaged green and moss-covered surfaces in both periods. This stands out vividly in historic black and white photography with the light off the caps and floor, when looking at the modern image of the same location you can see despite a certain weathering of the same brick work there is consistency across the two periods although a great deal of the moss has been removed for prosperity sake. Now interestingly this same overgrowth and vines has been copied to a certain degree in the digital version of 1914 although as a small aesthetic the presentation is rather flat in contrast to its real world state. The brick work is also more pronounced in the past using the larger more easily milled brick as opposed to the finer small residential brickwork present in houses at that time. The street furniture in the past such as the lamppost is a superfluous touch, the overgrowth on the brickwork that was relatively restrained and contained in the past showing two contrasting effects in the digital version. A full tree and flat rendered vines on the wall. From what we can see, with what we have the digital world resembles more the modern-day as opposed to actual historic footage of the Tower.

The next perspective we see is from a historical image provided by the Artists Rifles Association of the marching band standing at attention with their large orchestral drums ready to lead the soldiers on their march from the tower. From the archive image shown we can see the largely white flat surface outside the exterior of the Royal Chapel, perhaps a chalk or flat stone effect. Beside the marching band the windows of the chapel with a substantial level of overgrowth from the near by tree’s. In contrasting to the digital presentation we see inconsistencies in the ground which again resembles a variation of the slabs and stones in the modern-day world as opposed to how the Tower looked when it served as a barrack for the troops. We can see and deduce from observation this image was taken towards the front of the Chapel near where the tree in the foreground now stands. During the time period shown we can see a great deal more growth over hanging the troops however in the digital presentation these tree’s have been shifted and moved again, small amendments to the real world locations but interesting to note when you can visually contrast the two perspectives.

The final image for contrast was taken at the corner of the White Tower overlooking the building where the Crown Jewels are now held today. Composed of troops stationed at the Tower with two visiting boy scouts pictured amongst them. A wonderful image contrasting the various ages of the young men who volunteer and signed up to make the ultimate sacrifice for their countries. The angle is a little difficult to tell in this shot however from what we can see the stone work on the tower in all three periods is relatively consistent, largely untouched with some weathering and damage but less so than other buildings in the Tower. The cannon they stand before is not present in the past so a small detail however certainly in the gaming world fortifications and weaponry were present so I can forgive this as a minor change. The floor of the digital world environment is a little off as observed in the Royal Chapel photo, resembling more the modern-day stone slabs of various colours and shapes in contrast to the relatively flat and basic stone path the soldiers stood upon in the past. In all three periods from observation we can safely deduce the world of Assassins Creed Syndicate is a relatively consistent representation of the Tower of London, perhaps more akin to the modern-day and with only limited images available it is safe to assume digital reconstruction was based on modern observations and plans in contrast to the photos and images from the past.

That said the original intention of this article wasn’t to lambaste or critique the game to any great detail, having written about the location previously I am of the honest opinion the studio have done a fantastic job in bringing this historical location to life in as great a detail as they have. From various observation points and locations in the Tower it is evident they have visited and captured the general approximation of the place with certain angles and views almost identical to their real world equivalence. This piece was written entirely to finally compare and contrast the two historical environments, the digital and real world as it existed during the Great War. From what images we have available to see of this time the Tower served a necessary function in supporting the war effort and as we can see the upkeep and preservation weren’t to as high a standard given the circumstances. That it didn’t suffer as significant damage as other London buildings is a remarkable feat and as a result continues to stand today. Can a video game capture the environment of war? faithfully? perhaps. A great many have tried to do see from Call of Duty to Valiant Hearts, few if any have attempted to capture the prelude and march to war, the troops preparing to deploy, many not to return. Syndicate presented a war-torn London that was relatively unscathed with civilians mingling around the Tower going about their lives. Within, a familiar ‘temple’ to explore with guards patrolling and attacking on site but a relatively open environment to climb and see. Now, finally we can see how life existed at this popular site all those years ago, a mass of soldiers ready to march off for King and Country. A site of importance not empty and clear but full of life, and hope. 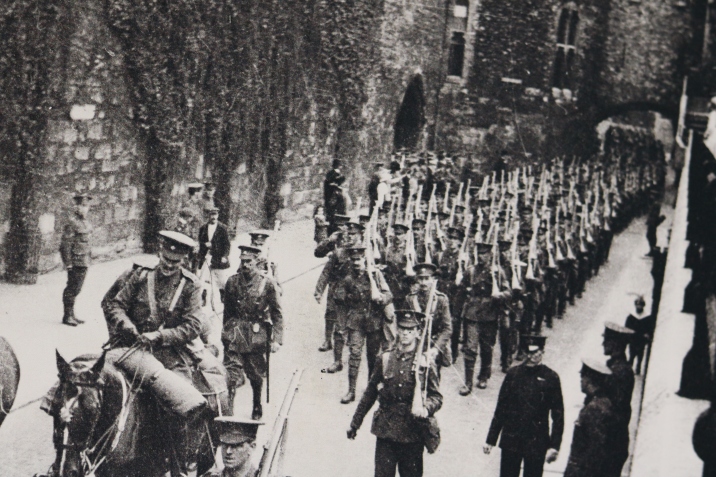 If you’ve enjoyed reading this blog please ‘like’ the Around The Bonfire Facebook page and contribute your own stories and comments, and share my blog and Facebook posts (this is really important – it’s how we reach more readers!). Alternatively join us in the Twitter Universe  for a take on the latest gaming news or Instagram for a wealth of gaming pictures and stories.

2 thoughts on “The Tower of London during the Great War”