This is my inaugural year and entry to the Blogger Blitz competition as set by Robert at the Adventure Rules page with a fascinating brief taking a pre-established relationship in the media world and imposing upon them a variety of challenges and situations and allowing you as the writer to determine the scenario and outcome as you see fit. There are a series of rounds that will eventually determine a winner. In this round I am writing ‘against’ the FlameFlash page with his article as we attempt to answer the opening challenge and situation set by Robert:

“Is there any sign of love more powerful than taking care of someone while they’re sick? Your Ship has called you in sore need of some medicine for a terrible cold, but you can’t just hand your sick buddy some pills – this cold has some kooky side effects that threaten to tear the whole house apart! What kind of bizarre illness has affected your Ship, and what can you do to protect them and their home until the sickness passes? We’ll find out in your submission for Sick Day Savior!”

I decided to tackle this challenge in the form of a personal log completed by Commander Shepherd following the spread of a virus aboard the Normandy and the conflict felt by the hero of the Mass Effect saga as his love and paramor Ashley Williams is inflicted to find a cure and save the day. I’ll concede there was a temptation to draw on some of the beats or emotions expressed during the sequence of events where Ashley was injured in the third game however I wanted to attempt something original and so created a fictional virus spread aboard the ship drawing parallels to some of the fervent nationalism in politics and the division between the human and alien species in this fictional universe. I look forward to checking out my competitors entry and if this my only participation in this event it was fun to flex my fictional writing skills. 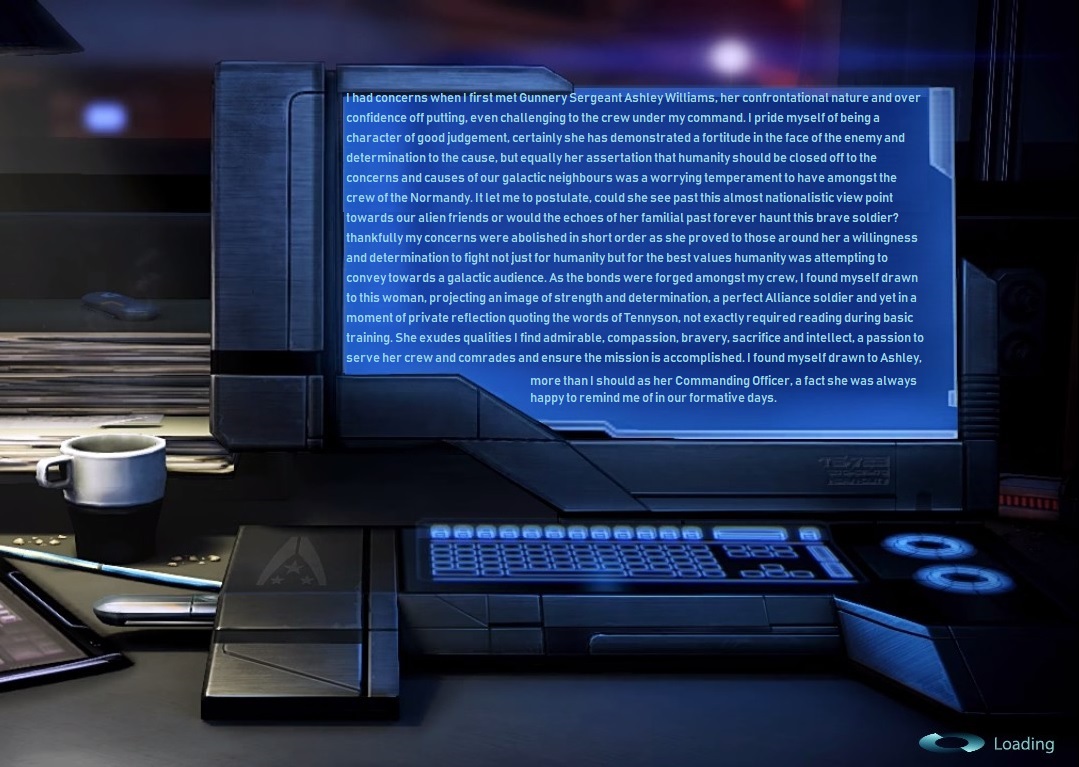 I had concerns when I first met Gunnery Sergeant Ashley Williams, her confrontational nature and overconfidence off putting, even challenging to the crew under my command. I pride myself of being a character of good judgement, certainly she has demonstrated a fortitude in the face of the enemy and determination to the cause, but equally her assertion that humanity should be closed off to the concerns and causes of our galactic neighbours was a worrying temperament to have amongst the crew of the Normandy. It let me to postulate, could she see past this almost nationalistic view point towards our alien friends or would the echoes of her familial past forever haunt this brave soldier? thankfully my concerns were abolished in short order as she proved to those around her a willingness and determination to fight not just for humanity but for the best values humanity was attempting to convey towards a galactic audience. As the bonds were forged amongst my crew, I found myself drawn to this woman, projecting an image of strength and determination, a perfect Alliance soldier and yet in a moment of private reflection quoting the words of Tennyson, not exactly required reading during basic training. She exudes qualities I find admirable, compassion, bravery, sacrifice and intellect, a passion to serve her crew and comrades and ensure the mission is accomplished. I found myself drawn to Ashley, more than I should as her Commanding Officer, a fact she was always happy to remind me of in our formative days. 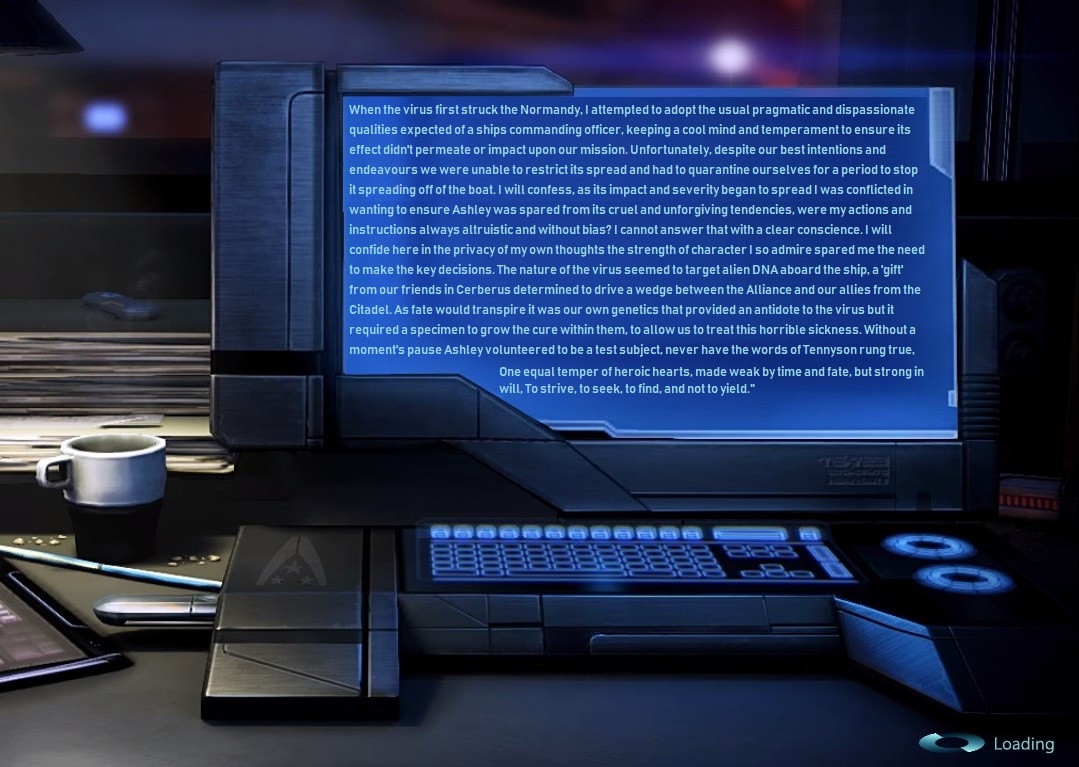 When the virus first struck the Normandy, I attempted to adopt the usual pragmatic and dispassionate qualities expected of a ships commanding officer, keeping a cool mind and temperament to ensure its effect didn’t permeate or impact upon our mission. Unfortunately, despite our best intentions and endeavours we were unable to restrict its spread and had to quarantine ourselves for a period to stop it spreading off of the boat. I will confess, as its impact and severity began to spread I was conflicted in wanting to ensure Ashley was spared from its cruel and unforgiving tendencies, were my actions and instructions always altruistic and without bias? I cannot answer that with a clear conscience. I will confide here in the privacy of my own thoughts the strength of character I so admire spared me the need to make the key decisions. The nature of the virus seemed to target alien DNA aboard the ship, a ‘gift’ from our friends in Cerberus determined to drive a wedge between the Alliance and our allies from the Citadel. As fate would transpire it was our own genetics that provided an antidote to the virus but it required a specimen to grow the cure within them, to allow us to treat this horrible sickness. Without a moment’s pause Ashley volunteered to be a test subject, never have the words of Tennyson rung true, “One equal temper of heroic hearts, made weak by time and fate, but strong in will, To strive, to seek, to find, and not to yield.”

We found ourselves isolated from help and assistance, the virus begun to take its strain aboard the ship and crew, the first fatalities horrific to witness the impact as it took its toll. Never could I imagine the human race could inflict such cruelty and hatred upon our galactic brothers and sisters, was it an attempt to spread the worst vision of a purified race and species on the cosmos? I can’t speculate or comment on their actions and motivations. From this account of the incident aboard the Normandy I can only comment that it was Ashley stepping forward and acting as a host for an experimental cure that saw its terrible impact restricted to our ship. I remember sitting at her bedside, holding her hand tightly, the feeling of despair, fear, isolation and helplessness washing over as waves in the ocean, despite all the tools and resources of the Spectres, I could only rely on the skills of our Chief Medical Officer to bring my beloved back to me. It made me realise since its inception aboard the ship I had a clear set of directions and duties to perform, actions to take and places to be. But when confronted with Ashley lying there, helpless all I could do was trust in others to do all they could. You never realise how helpless you can feel until you are sat there, watching the person love with every fibre of your body fighting a losing battle from within. As cliched a sentiment as it sounds, I would have gladly in my darkest moments traded places with Ashley. I think she knew that as well, she also knew the ship needed its commanding officer and gave herself first to ensure I could continue to serve everyone else first. 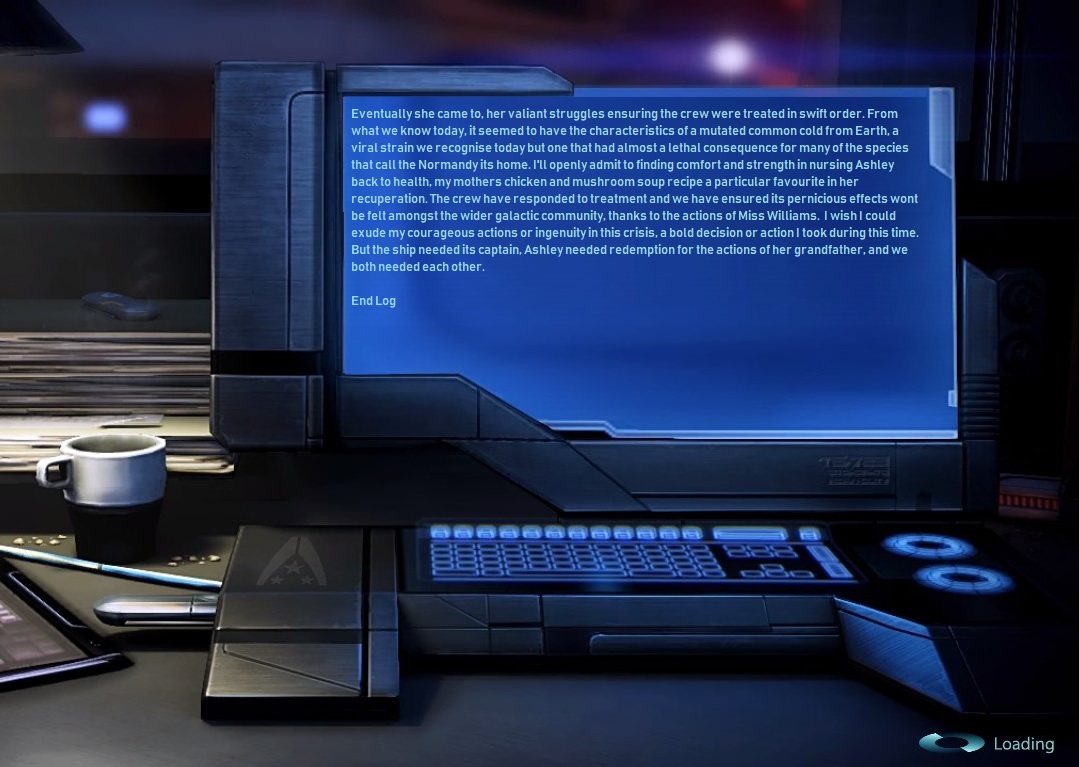 Eventually she came to, her valiant struggles ensuring the crew were treated in swift order. From what we know today, it seemed to have the characteristics of a mutated common cold from Earth, a viral strain we recognise today but one that had almost a lethal consequence for many of the species that call the Normandy its home. I’ll openly admit to finding comfort and strength in nursing Ashley back to health, my mothers chicken and mushroom soup recipe a particular favourite in her recuperation. The crew have responded to treatment and we have ensured its pernicious effects wont be felt amongst the wider galactic community, thanks to the actions of Miss Williams.  I wish I could exude my courageous actions or ingenuity in this crisis, a bold decision or action I took during this time. But the ship needed its captain, Ashley needed redemption for the actions of her grandfather, and we both needed each other. 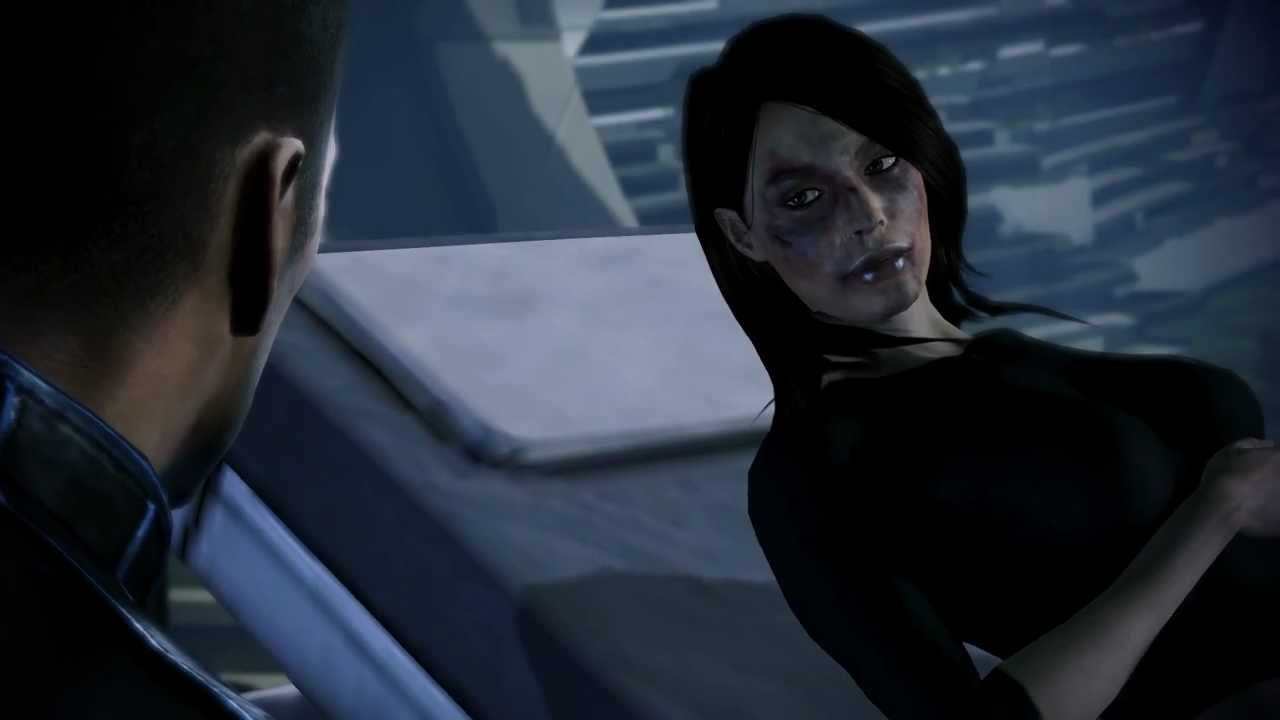 If you’ve enjoyed reading this blog please ‘like’ the Around The Bonfire Facebook page and contribute your comments and thoughts of what you have read today, and share my blog and Facebook posts (this is really important – it’s how we reach more readers!). Alternatively join us in the Twitter Universe  for a take on the latest gaming news or Instagram for a wealth of gaming pictures and stories.

Resident of North West London, working in finance and writing about various subjects from media and gaming to travelling and the occasional food review. View all posts by charlesfwh